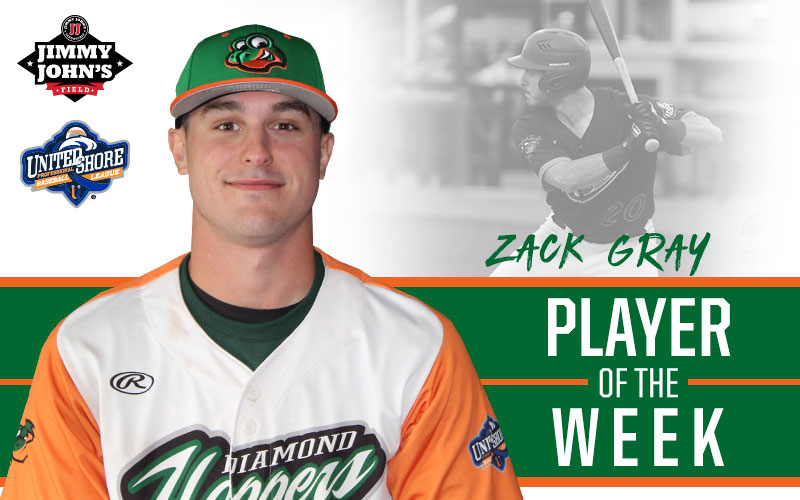 ROCHESTER, Mich. – Eastside Diamond Hoppers Zack Gray has been selected as the United Shore Professional Baseball League’s Player of the Week, announced by the league office on Monday. Gray, a native of Hamilton, Ohio, earns the honor for the first time this season.

Gray led the league with an impressive .667 batting average (6-for-9) last week over three games. He walked twice and posted a .727 on-base percentage.

It’s been a tough season for the utility player, as Gray lost his father on July 2nd at 63 years old. Amazingly, he played two days later on July 4th and went 2-for-4 with a double and four runs batted in.

On the season, Gray has started in 34 of 35 games played in, batting .277 with seven doubles, one triple, one home run, 14 walks and 20 RBIs. He ranks tied for third in the USPBL in doubles and tied for ninth in RBIs.

Gray and the Diamond Hoppers will be in action this Wednesday against the Westside Woolly Mammoths at 7:05 p.m. Gates open at 6 p.m. for ALS Awareness Night on 2-for-1 Wednesdays that include buy 1 grandstand ticket, get 1 FREE, and buy 1 hot dog and get 1 FREE. Fans can take batting practice on the field after the game.