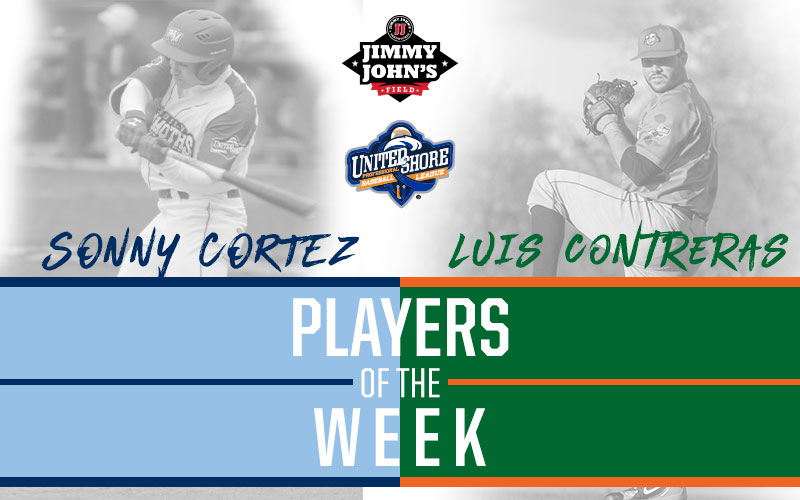 Cortez and Contreras Earn USPBL Co-Players of the Week

ROCHESTER, Mich. – Westside’s outfielder Sonny Cortez and Eastside’s right-handed pitcher Luis Contreras were selected as the United Shore Professional Baseball League’s Co-Players of the Week, announced by the league office on Wednesday. Cortez earns the weekly honor for the first time, while this is the second time in three weeks Contreras is recognized.

Cortez, a native of San Pedro, Calif., posted a .571 batting average last week, going 8-for-14 and scored a league-best eight runs in four games played. He drove in two runs and tallied an astounding .727 on-base percentage with eight walks. Cortez is now tied for the league-lead with a .433 batting average

Contreras continues to be one of the top pitching prospects in the USPBL. A native of Pembroke Pines, Fla., Contreras dominated the first-place Unicorns last Saturday night, taking a no-hitter into the sixth inning and finished the game with 11 strikeouts, allowing just one hit over 7.0 innings of work. He improved to 2-1 on the season and leads the league with 27 strikeouts this season.

Cortez and the Woolly Mammoths will be in action this Friday night against the Utica Unicorns. Game time is set for 7:05 p.m. and gates open at 6 p.m.

Contreras will make his next start on Saturday as he takes on fellow top pitching prospect Donald Goodson from the Unicorns. Game time will be 7:05 p.m. and gates open at 6 p.m. The Diamond Hoppers will wrap-up the weekend with a game against the Birmingham Bloomfield Beavers at 1:05 p.m. this Sunday, gates open at Noon.