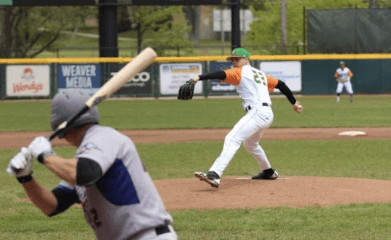 “Our hitting coach and manager prepared us very well for today,” said Chenoweth.

The Diamond Hoppers scored their first two runs in the bottom of the second inning, but Unicorns center fielder Brandon Rawe hit a two-run home run to right field to tie the game in the top of the third inning. Rawe went 2-3 on the day.

In the bottom of the fourth inning, Chenoweth hit a monster home run to left field to give the Diamond Hoppers a 4-2 lead.

“I was just trying to work the middle and catch as many barrels as I could,” Chenoweth added.

Tanner Kiest started on the mound for the Diamond Hoppers and threw four innings, allowed two runs and struck out five. Alexander followed with four shutout innings and three strikeouts. He also picked up the win in his 50-pitch outing.

“It was the first outing of the season, and it felt good to go out there and perform well,” said Alexander.

The Diamond Hoppers scored one run in the fifth inning and one run in the eighth inning to make it a 6-2 game. The Unicorns scored their third and final run on a single by Nick Todero in the top of the ninth.

The Diamond Hoppers are 2-0 this season and will be back in action on Thursday, May 18, when they face the Birmingham-Bloomfield Beavers.