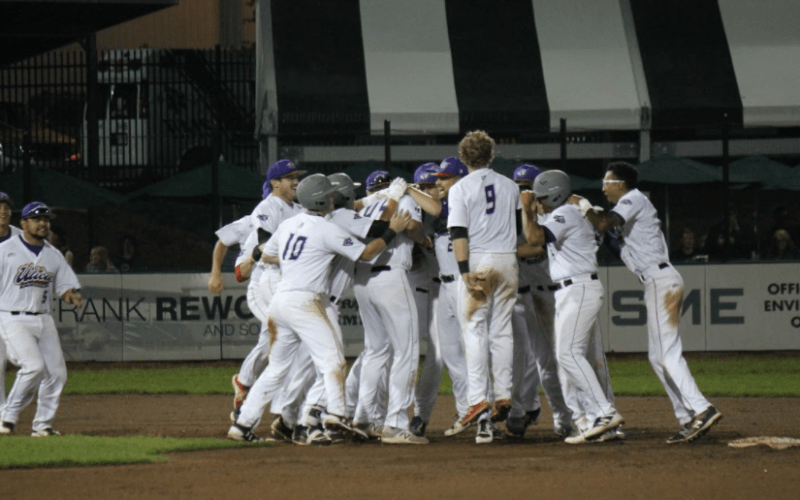 Utica — Unicorns first baseman Clay Ardeeser hit a walk-off RBI single in the bottom of the ninth inning to give the Unicorns an 8-7 victory over the Eastside Diamond Hoppers.

“I was looking for a fastball up in the zone,” Ardeeser said. “I wanted to make sure I saw it in a good zone where I could hit it.”

Ardeeser went 1-3 with three RBI’s and two sacrifice flies in the Unicorns victory.

Luke Doyle and Brandon Rawe also had big nights for the Unicorns. Doyle was 3-4 with a walk, an RBI and three runs scored. Rawe was 3-3 with a home run, two walks, two RBI’s and two runs scored.

“It was a pretty exciting comeback for us,” Unicorns Manager Jim Essian said. “We’ve got a powerful offense and it showed in the last inning.”

The Unicorns came right back in the bottom half of the fifth after an RBI double from Doyle tied the game at four. Ardeeser’s second sacrifice fly gave the Unicorns a 5-4 lead.

“We’re getting better at swinging the bats well, and we just need to fix some problems on defense,” said Essian.

The Diamond Hoppers would score one run in the sixth inning, one in the seventh inning and one in the eighth inning to take a 7-5 lead, but a three-run ninth inning capped off by Ardeeser’s walk-off single helped the Unicorns earn the victory.

Diamond Hoppers shortstop Ricky Castro and catcher Cyle Figueroa both went 2-4 with an RBI. First baseman Esteban Gomez was also 2-4 with a walk.

“We really wanted to come through and get a big win tonight to try and get on a roll,” Ardeeser added.