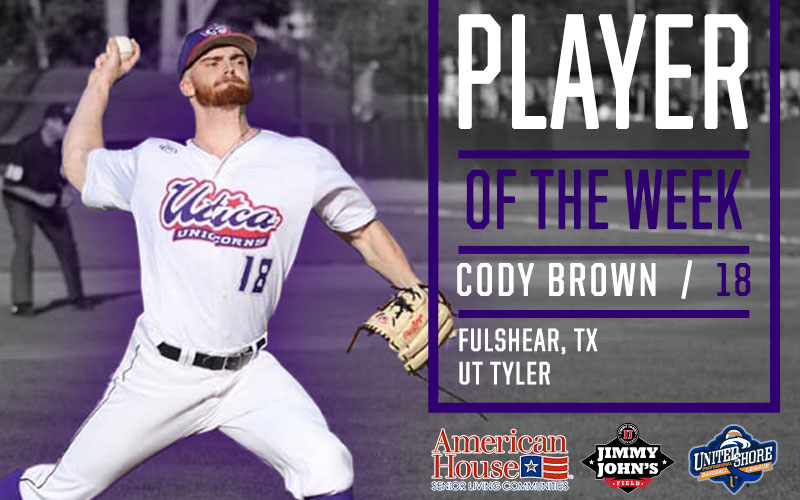 ROCHESTER, Mich. – Right-handed pitcher Cody Brown was named United Shore Professional Baseball League American House Player of the Week for June 18-24, announced by the league office on Monday. Brown, a native of Fulshear, Texas, is in his second season with the Utica Unicorns.

Brown tossed the first complete-game shutout in the USPBL on Thursday, June 21, scattering six hits and struck out eight. He allowed just one walk and led the Unicorns to a 1-0 victory over the Westside Woolly Mammoths.

A two-time national champion at Tyler Junior College, Brown leads the USPBL with 54 strikeouts in 45.0 innings pitched. He is tied for the league lead with three wins and has a 2.00 earned run average.

The USPBL will host games Thursday-Sunday this week. Promotions include the Human Cannonball on Thursday night, along with Greek-American Heritage Night, Friday Fireworks Spectacular, WCSX Classic Rock Saturday (Eagles Tribute Band) and Sunday Fun Day with the first-ever Bark in the Park at Jimmy John’s Field.

The USPBL will also host its first-ever night game on the 4th of July (7:05 pm) and the Home Run Derby and All-Star Game will be on Saturday, July 7. To purchase tickets, please click here.