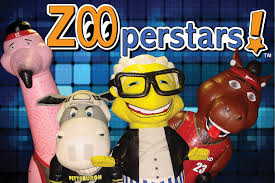 We are “Free Fallin'” into some silliness tonight! WCSX Classic Rock Saturday continues with Tom Petty tribute band: Teddy Petty and the Refugees who are showing up
and they “Won’t Back Down”! Teddy Petty and the Refugees will be headlining all night while the nationally known Zooperstars will be taking center stage, as well. Come see the world-famous ZOOperstars!, one of the most popular acts in sports entertainment.  This hilarious show consists of inflatable characters with funny names, such as Shaquille O’Seal, Tim Tebull, Mia Hammster, Monkey Mantle, Whale Gretzky and Tiger Woodschuck, as they perform synchronized routines, combining acrobatics, tricks, and unforgettable comedy that appeals to fans of all ages!  The ZOOperstars! are lovable, outrageous, hysterical, and incredible.  This crazy combination of inflatable, animalistic superstars perform fantastic routines, making them one of the most hilarious shows in sports!  The hilarious ZOOperstars! will rock the house with comedic routines that fans of all ages will love!  The ZOOperstars! comedy show is one of the most popular acts in sports!