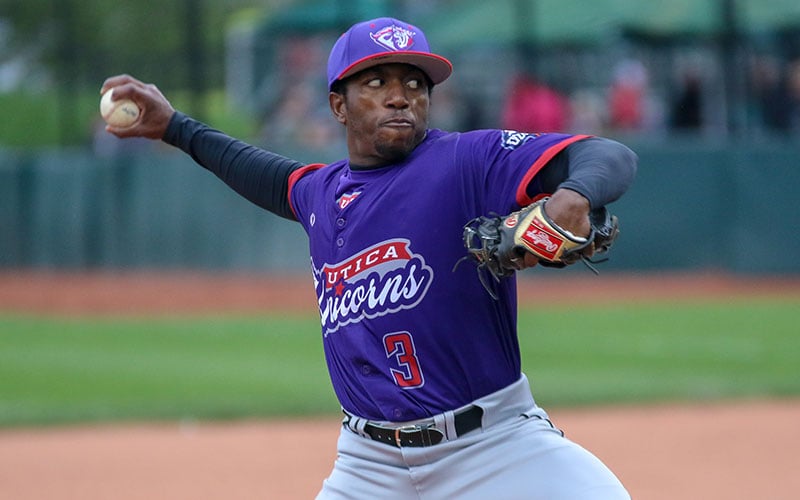 From Shortstop to MLB Pitching Prospect

Donald Goodson is one of the top affiliated club prospects in the United Shore Professional Baseball League. But his path to getting there was nothing like he ever thought it would be.

Goodson, who leads the USPBL by holding opponents to a low .148 batting average and boasts the league’s second-best ERA (1.12) with the Unicorns, played as shortstop throughout his college career, which ended at Northeastern Junior College. As a regular with potential for pro ball, Goodson wanted to take the next step in professional ball, but was disappointed when he wasn’t drafted.

“Goodson has now spent the better part of 10 months dedicating himself to learn the art of pitching. More importantly, he’s learning to embrace and learn the process of what it takes to not only understand his pitching delivery but develop his own process to be able to use his natural talent, now on the mound, to become successful at the next level.”

He signed up for the USPBL Senior Showcase in June 2018 where he played infield and outfield. At one point during the tryout he uncorked a 95 mph strike from the outfield, which immediately grabbed the attention of USPBL Staff. Goodson then was put on the mound to face live hitters and showcased an ability to have a feel for multiple pitches. From there, he was tabbed as a developmental pitcher with “upside.”

“I played shortstop and the infield my entire life and all of a sudden they were telling me that they wanted me to be a pitcher,” said Goodson. “I pitched a few innings in college but it never crossed my mind this would be what I would be doing now.”

So during the past winter he worked with Director of Baseball Operations and Delivery Value System founder Justin Orenduff. There he continued to refine his pitching delivery and prior to the USPBL season he traveled to Florida to build innings and gain more experience on the mound.

“Goodson has now spent the better part of 10 months dedicating himself to learn the art of pitching,” said Orenduff. “More importantly, he’s learning to embrace and learn the process of what it takes to not only understand his pitching delivery but develop his own process to be able to use his natural talent, now on the mound, to become successful at the next level.”

A righty from Detroit, Goodson has developed to where his fastball can reach 96 mph and he can throw his offspeed pitches at any point in a count. Despite the heat, Goodson feels his changeup is his best pitch. And he complements both with a curve and slider.

While the major goal during the offseason and early in the USPBL is to get his arm in shape and geared up, Goodson has also committed to running hills and working out on a daily basis. It’s all a part of the mindset of performing at a high level and catching the eye of the next scout. In fact staying in shape and throwing strikes is what Goodson feels will be his ticket to an affiliated contract.

“The main statistic that (scouts) look at is do you throw strikes and do you have command,” he said. “That’s what matters at the next level. They want you to throw your curve and changeup for strikes and get outs with them too.”

Goodson is continuing to work on all of that in the USPBL, which he calls a “competitive league with a great atmosphere.” Goodson has been impressed with the crowds and everything about the league.

A Mumford High School graduate in Detroit, Goodson will continue to be challenged by the USPBL in the upcoming months as he prepares to be signed by an affiliated club. The scouts have already come out early this season to see him throw, and he has continued to progress. Goodson is in a good spot to potentially be signed by a Major League team after the draft.