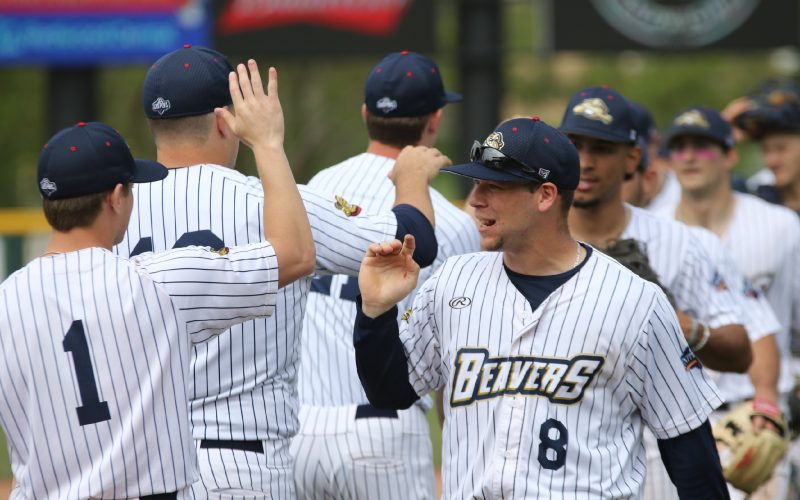 UTICA, Mich. – Christian Helsel went 2-for-3, with two RBIs, and Thomas Roulis finished 2-for-3 and drove in the game-tying run to lead the Birmingham Bloomfield Beavers (1-0) to a come-from-behind win over the Eastside Diamond Hoppers (0-2), 4-3, on Sunday at Jimmy John’s Field.

Right-handed pitcher Cameron MacKenzie (1-0) struck out 12 batters in six innings in the start for the Beavers in a no decision. RHP Jonathan Escobar earned the win in relief.

Eastside’s Chris Mangus made a splash in his first weekend, setting a new USPBL record with three consecutive home runs, dating back to his pinch-hit home run on Saturday night against the Utica Unicorns, slugging homers in his first two at bats today to make three straight dingers in three at bats. Mangus, a native of Niles, Mich., finished the weekend 3-for-5, with three home runs and three RBIs.

Trailing 3-2 in the eighth, Roulis drove in the game-tying run with a triple and Robb Paller delivered the go ahead run with a sacrifice fly to left field. RHP Matt Dallas shut the Diamond Hoppers down in the ninth inning to record his first save of the season.

Tyler Palm was brilliant for the Diamond Hoppers on the mound, tossing five scoreless innings, allowing just two hits and struck out five in a no decision.

Promotion:
Fans can meet and greet with the Hoppers before the game and stick around for a Spectacular Fireworks Show after the game, presented by Xfinity.

Promotion:
WCSX Classic Rock Saturday with Cream Tribute Band and Armed Forces Day, $2 off any ticket for Veterans. WCSX radio personalities will be at the ballpark.

Promotions:
Sunday Fun Day with Cat Hero, presented by Fairytale Entertainment. The first 500 fans through the gates will receive a vintage throwback Bobblehead with a select number remaining from the 2016, 2017 season.

** Cat Hero will be at the main gates at Noon for meet and greets and will be visiting fans around the ballpark from 1-3 p.m.