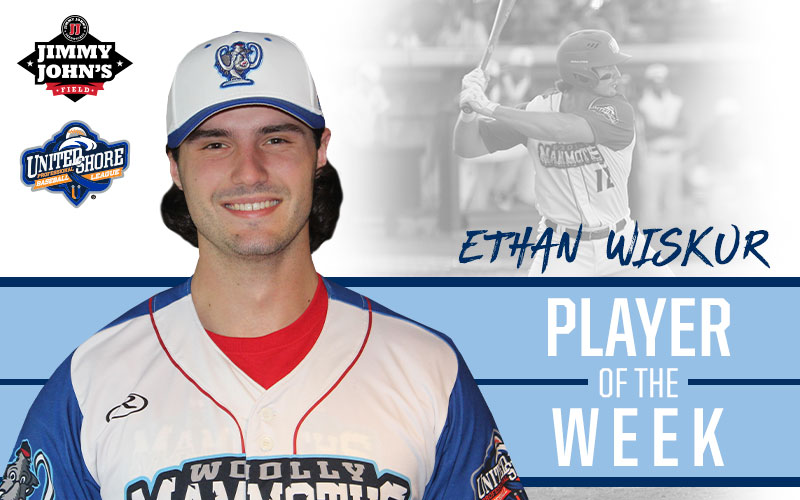 ROCHESTER, Mich. – Westside Woolly Mammoths outfielder Ethan Wiskur has been named as the United Shore Professional Baseball League’s Player of the Week for Aug. 26-Sept. 1, announced by the league office on Monday. Wiskur, a native of Clio, Mich., earns the accolade for the second time this season and fifth time in his career.

Wiskur helped lead the Woolly Mammoths to their first-ever pennant on Saturday night against the Utica Unicorns. The right fielder tied the all-time USPBL record with his 25th home run, blasting his 14th of the season. He finished 3-for-4 in the game, with a double and three runs batted in as the Mammoths blanked the Unicorns, 7-0, to earn the No. 1 seed in the USPBL Playoffs (Sept. 6-8).

Against the Beavers on Friday night, Wiskur went 2-for-3 with a home run as the Woolly Mammoths beat the Beavers, 5-4. It was one of the most entertaining games of the season and led to the showdown with the Unicorns on Saturday.

Championship Weekend at Jimmy John’s Field will be Sept. 6-8, presented by OUR Credit Union. The first 250 fans on Friday and Saturday will receive Championship Weekend t-shirts and the last Fireworks Spectacular of the season will take place after the playoff game on Friday night. Superheroes will be at the ballpark on Championship Sunday, courtesy of Fairytale Entertainment, along with Scotts Lawn Care Rally Towels.