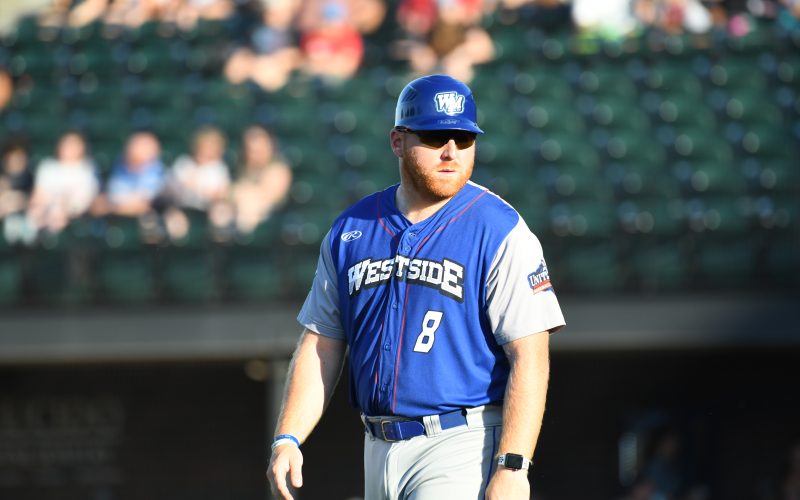 Where Are They Now? Independent Baseball’s Role In The Road To The MLB Stage

Utica, Mich. — When the USPBL powered by UWM opened the gates for its inaugural season in 2016, it immediately found success with both fans and Major League organizations. Within just six years, 45 players have signed contracts with 18 different MLB teams. The latest signing came less than two weeks into the USPBL’s seventh consecutive season in 2022, boosting that number now to a total of 46 players. This begs an obvious question, then: Where are they now? The league’s success hasn’t stopped with just getting players signed. Many USPBL alumni are currently playing in the high ranks of the Minor League system, and three have cracked MLB rosters so far, while some have even found their way back to the USPBL, working to help develop other athletes whose shoes they’ve already been in.

After pitching 45.0 innings for the Utica Unicorns in 2019, Spencer Stockton inked a deal with the Cincinnati Reds organization. Once assigned to the Greeneville Reds at the Rookie level, Stockton had an impressive outing early on, allowing only one run through eight scoreless innings and securing a win. He continued working his way up the minor league ladder. After just seven outings into the 2022 season with the Dayton Dragons in High-A, he headed to Tennessee to play up in Double-A with the Chattanooga Lookouts. His performances in late July, which included 10 strikeouts and no earned runs in 5.3 innings, secured him Southern League Pitcher of the Week honors.

Josh Hejka came to the USPBL after a successful collegiate career with John Hopkins University. He pitched just 6.2 innings for the Westside Woolly Mammoths before catching the eye of the New York Mets’ scouting department and signing a contract. Hejka has played all throughout the Mets’ farm system. He started off his affiliated baseball career down at the Rookie level with the Kingsport Mets in 2019. One season later, he moved higher up the ranks, transitioning between A+, AA, and Triple-A. This season, Hejka has 37 strikeouts, four wins, one hold, and one save in 37.1 innings pitched for the Birmingham Rumble Ponies in AA.

In 2019, Randy Dobnak became the USPBL’s first alumni to live out every baseball player’s dream of playing in the Major Leagues. In his debut, on August 9, Dobnak pitched four scoreless innings of relief for the Minnesota Twins. In the postseason, he started Game 2 of the American League Division Series against the New York Yankees. Unicorns manager Jim Essian recruited Dobnak out of Alderson Broaddus University. He pitched 35.0 innings for the Unicorns in 2017, where he had three wins, a 0.80 WHIP, and a 2.31 ERA. After just six games, Dobnak signed a deal with the Twins organization.  He quickly worked his way up the minor league ladder, moving from the Rookie level to AAA in under two years. During his stint in AAA, he earned Pitcher of the Week less than two weeks before getting the call up to the Majors. Dobnak also took home Minor League Baseball Organization All-Star honors in 2019. Since, Dobnak has 125.2 career innings pitched with the Twins, and in 2021, he signed a five-year contract extension.

Adrian Guzman played for the Unicorns for two consecutive seasons in 2018 and 2019. Former Director of Baseball Operations Justin Orenduff said that Guzman had one of the quickest releases from shortstop, making him a very strong defensive player. Guzman’s skills and a .970 fielding percentage earned him a deal with the Twins organization during the 2019 season. He returned to the USPBL in 2021 to continue working on his craft with the Woolly Mammoths. Guzman ended the season with a .288 batting average, 30 hits, and 10 RBIs and was nominated for the USPBL’s Defensive Player of the Year and Sportsmanship Award. His time with the USPBL didn’t end there, however. In 2022, he joined forces with Essian, his former Unicorns manager, as he stepped into the role of assistant manager. Guzman’s work this season has helped the Unicorns take a staggering lead into first place in the standings and clinch the No. 1 seed in the playoffs.

Randy Wynne spent two consecutive seasons with the Birmingham Bloomfield Beavers in 2016 and 2017. He was crowned MVP after pitching a complete game in the 2017 championship game, where he struck out 14 batters, a USPBL single-game record. After his time in the USPBL, Wynne signed with the Reds organization in 2019. While playing in the lower ranks, he won Pitcher of the Week after striking out 25 and walking just one over two eight-inning starts with the Greeneville Reds. That was followed by a short stint with the Dragons, where he struck out 17 batters over eight one-hit innings. In 2021, Wynne was promoted to AA, and in 2022, he got the call up to play in AAA. Wynne has started in 22 games, picked up five wins, and collected 79 strikeouts with the Louisville Bats this season as he works to cross the threshold as a Major League player.

Mitch Aker played in the USPBL’s inaugural season and was one of the 13 players who earned a contract with an MLB team. Aker signed with the Arizona Diamondbacks organization and worked his way up the ranks of the minor league system. He reached up to the AAA level before returning to the USPBL six years later in 2022. Aker landed the role as a trainer for DVS Baseball. Founded by Orenduff, DVS Baseball uses a system designed to correct and refine a pitcher’s mechanics as well as assess and reduce risk of injury. DVS Baseball works closely with each one of the USPBL’s pitchers. Aker is currently the league’s pitching coordinator. As he utilizes his past experience and expertise, Aker works to instruct and assist pitchers in their delivery mechanics to improve in-game success, while also reduce recovery time.

The USPBL recently celebrated its second former player to reach the highest level of baseball. Logan Gillaspie made his MLB debut on May 17, 2022, against the Yankees, giving up no runs in two innings of relief. Back in 2018, Gillaspie was rapidly developing his craft in the USPBL as a converted catcher with limited pitching experience. He pitched 27 innings, eight of which were scoreless, for the Eastside Diamond Hoppers and had a 2.67 ERA. His hard work paid off. Gillaspie signed a contract with the Milwaukee Brewers organization. He spent the remainder of the 2018 season in the lower ranks of the farm system, but was released the following September. In 2021, the Baltimore Orioles signed the free agent to a minor league contract. Gillaspie started in A+, playing for the Aberdeen IronBirds and in a little over a month, moved up to AA, where he had four holds, two saves, and 36 strikeouts in 27.1 innings of work. Gillaspie continued to climb the ranks in the Orioles system, reaching AAA in 2022. He played in just three games before receiving the call up to the Majors and has since split the season between the MLB and AAA, working to establish himself as a full-time Major Leaguer.

Dugan Darnell didn’t begin his collegiate pitching career until his senior year at Adrian College. Darnell came to the USPBL in 2019 and returned in 2020, where he worked on his craft and increased his velocity. He went from throwing 88-91 MPH to 92-95 MPH and had an average spin rate of 2466.0 on his four-seam fastball during his time with the league. Darnell signed a contract with the Colorado Rockies organization that offseason. He played for the Rockies’ Low-A and A+ affiliates in 2021, combining for a 1.95 ERA, a 0.76 WHIP, and 80 strikeouts in 55.1 innings. His impressive work led to Darnell winning Pitcher of the Month and MiLB All-Star honors while with the Spokane Indians in A+. This season, Darnell moved up to AA to play for the Hartford Yard Goats.

Taylor Grzelakowski came to the USPBL after an impressive collegiate career at Madonna University, where he received multiple awards for his performances. The All-American played only 29 games with the Unicorns as a utility player in 2017 and claimed the title of Homerun Champion before signing a deal with the Twins organization. While assigned to A+ with the Fort Myers Miracle in 2018, Grzelakowski’s performances earned him Florida State League Mid-Season and Post-Season All-Star honors as well as MiLB All-Star honors. He claimed a spot on the roster to advance to AA the following season, where he played for the Pensacola Blue Wahoos. In 2021, Grzelakowski returned to the USPBL, though this time as the Woolly Mammoths assistant manager. This season, Grzelakowski was promoted to manager of the Woolly Mammoths, where he works to help other athletes develop and hone in on their skills for Major League organizations to take notice. Aside from his duties with the league, Grzelakowski was named the new head coach for the baseball program at Macomb Community College and serves as the hitting coach and recruitment coordinator at his Alma Mater Madonna University. Grzelakowski also founded Fortitude Baseball Consulting, whose goal is to provide athletes the mental and physical training needed to succeed in their baseball careers.

Jared Koenig spent the 2017 season bouncing between multiple independent leagues, including a stint in the USPBL, where he pitched for the Beavers. Koenig eventually caught the eye of the Oakland Athletics’ scouting department who signed the free agent in 2020.  He went on to pitch 121.1 innings and collect 100 strikeouts for the Midland RockHounds in AA. His performances helped him claim Texas League Post-Season and MiLB All-Star honors. In March 2022, Koenig was assigned to the A’s 40-man roster. He began the season in AAA, ranking in the top three in multiple pitching categories with the Las Vegas Aviators. On June 8th, Koenig made his long-awaited MLB debut as the starting pitcher against the defending World Series champions, the Atlanta Braves. Koenig has since continually been recalled back up to Oakland, as he continues to establish himself in the Majors.

With a successful past, an exciting present, and a promising future, owner and CEO Andy Appleby has his sights focused on league expansion. His vision for the near future is to create a minimum of two more teams and to build another ballpark in time to kick off the 2024 season. An expansion of the league will continue the USPBL’s goal: to provide players the opportunity to develop and enhance their skills and then provide them the platform to showcase those skills in effort to help them reach their dreams of playing in the MLB. With the success that many former USPBL players have achieved in their baseball journeys, the future looks bright.