Meet Jake the Diamond Dog, who has a not-so-ordinary job for a well-behaved pup.

Jake travels to ballparks across the Midwest to show off his certain skills which, according to his website, include delivering the game ball to the pitcher, shagging foul balls, taking water and towels to the umps, playing batboy and catching Frisbees.

The Golden Retriever went viral in a video shared by ABC sports anchor Zach Groth, who captured Jake carrying a basket of water in his mouth to umpires between innings at a Fort Wayne Tin Caps game.

For his efforts, Jake desires only one thing: head pats.

Always a fan favorite, Jake will bring his collection of talents to the United Shore Professional Baseball League on July 29 and 30, a must-see for any dog and pet lover. The USPBL will also introduce its own very bat dog at Jimmy John’s Field for games in the 2018 season. You will get to meet the puppy on July 29 & 30! 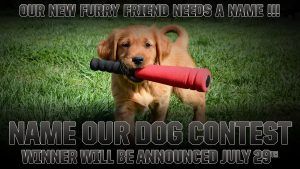 Fans will have the opportunity to submit suggestions for the Name the Dog Contest! The person who submits the winning name will get four free tickets to a USPBL game and bragging rights! We will be accepting name submissions now until July 28th on Facebook (https://www.facebook.com/USPBL#), Twitter (@USPBL), and Instagram (@USPBL) and at the ballpark on these days (Please visit guest services to Enter).