Noah Marcoux finished 2-for-4 with one RBI and one run scored. RHP Andrew Verbrugge tossed 7.0 innings, allowing one run and struck out nine. Joe Burke has one hit on the night and scored two runs with one RBI. Burke was robbed of a grand slam by centerfielder Drue Galassi. 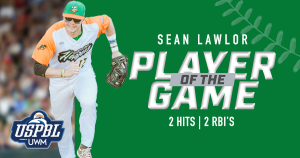 For the Unicorns, Malek Bolin had a 2-for-4 performance, and Adam De La Cruz had one hit and two RBIs.