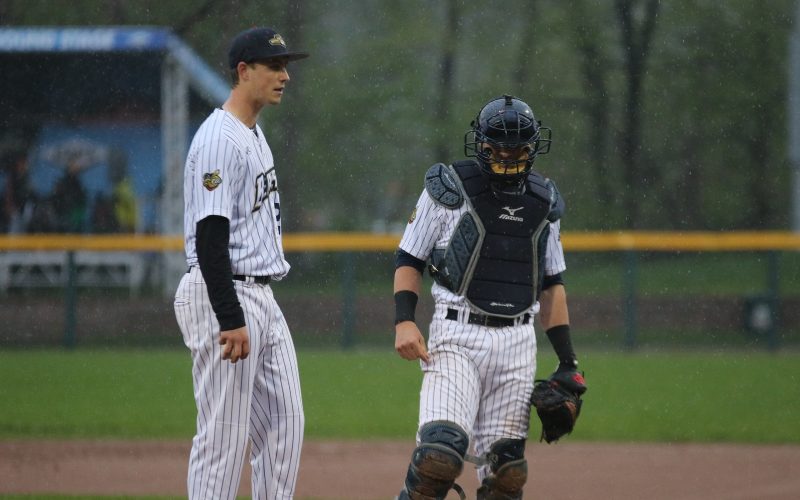 UTICA, Mich. – There were no stolen bases and no home runs as expected Friday night at Jimmy John’s Field. Poor weather postponed Opening Night for the 2018 United Shore Professional Baseball League between the defending champion Birmingham Bloomfield Beavers and the Westside Woolly Mammoths for the installment of the third season.

Despite the poor weather conditions, fans were treated to a ring ceremony and flag raising to recognize last year’s championship won by the Beavers. American Band played live music, Utica’s High School Band was spot on for the National Anthem, and the USPBL Bat Dog, JJ The Field General, delivered the game ball.

The two teams took the field and tried to play the game, but the rain continued to be resilient and eventually the game was postponed in the first inning with one out and two runners on base for the Woolly Mammoths.

The two teams will makeup this game at a date to be determined.

UPCOMING GAMES
Eastside Diamond Hoppers vs. Utica Unicorns, 7:05 p.m. first pitch (Gates open at 6 p.m.)
WCSX Classic Rock Saturday will feature a Journey Tribute Band, Captured Detroit, and WCSX radio personalities will be on site. There will also be a schedule magnet giveaway to the first 750 fans through the gates, and Kids Run the Bases after every game.

Eastside Diamond Hoppers vs. Birmingham Bloomfield Beavers, 1:05 p.m. first pitch (Gates open at Noon, 11 a.m. with a grandstand ticket and brunch included)
Sunday Fun Day at the ballpark will feature a Mother’s Day celebration with a brunch for fans who have purchased a Grandstand Ticket or Party Patio Ticket with the brunch included, as well as the first 1,000 Mothers who enter the ballpark will receive flowers courtesy of Thrifty Florist and one lucky mother will win a $100 gift card. There will also be a schedule magnet giveaway to the first 750 fans through the gates.