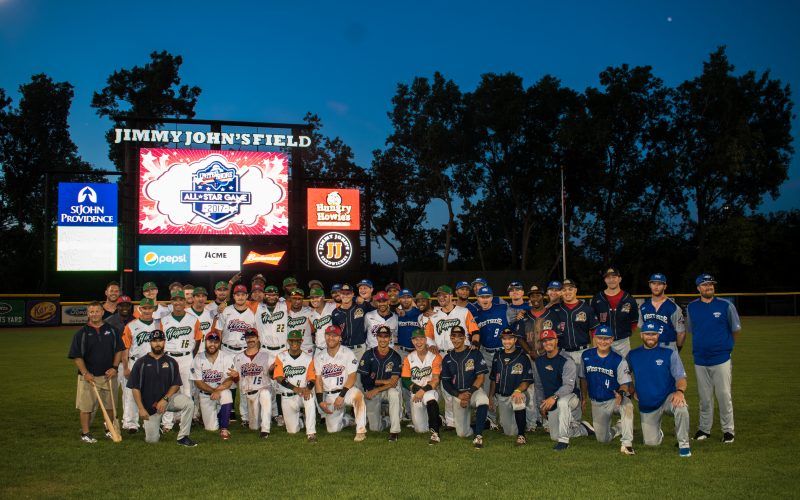 Nic Wilson of the Birmingham-Bloomfield Beavers was the winner of the first ever USPBL Home Run Derby Saturday at Jimmy John’s Field. Wilson, who has five home runs and 19 RBI’s in the first half of the season, won the competition on his final swing, recording nine homers in the final round.

Saturday, July 8 was also the second annual USPBL All-Star Game, where Westside Woolly Mammoths relief pitcher Corey Kimber earned MVP honors after striking out the side in the seventh inning. Kimber was a member of the West Division team, which tied the East Division 2-2 after seven innings of baseball.

The Beavers relished in their five-run command during the fifth inning Thursday, as shortstop Dan Kennon and catcher Robert Lucido notched two RBI’s each. The Diamond Hoppers were the first to get on the board in the top of the second from an Esteban Gomez solo homer.

Lucido, (Baltimore, MD) a former 2015 MLB draft pick by the Toronto Blue Jays, went 2-for-3 with a double and a triple.

Taylor Grzelakowski, who is leading the USPBL in home runs, continued his onslaught Friday night by adding his eighth total homer of the season. This win put the Unicorns a half game over the .500 mark.

The Mammoths were unable to mount a comeback late in the eighth inning, but they did put up four runs when Alex Abbott hit a two-run RBI double with the bases loaded.

The crowd rose to their feet and applauded East Division outfielder John Menken in the top of the first inning when he robbed West Division first baseman Nic Wilson of a home run in left-center field.

Two runs were scored by each division as the game later ended in a tie in seven innings. Beavers shortstop DJ Martinez had a two-run second inning RBI single while Chris Cruz and Brett Balkan each recorded an RBI for the East in the fourth inning.

“My velocity felt great and my arm felt really good,” said Kimber. “It’s a great feeling when you strike out the side.”

With the Mammoths losing their second game of the weekend set, they drop to a half game under .500 but lead the Beavers by one game in the West Division lead. They scored one run in both the seventh and eighth inning, which was after a 6-0 run by the Diamond Hoppers.

Chris Power and Esteban Gomez each scored two runs for Eastside, propelling them to 14-11 and first place in the league.

The storied rivalry between the Utica Unicorns and Eastside Diamond Hoppers continues Saturday, July 15, for control of the East Division. With the two teams holding the top records of the USPBL, a win for either side would be a building block towards gaining the top playoff spot in early September.

The Westside Woolly Mammoths will look to get back on track after losing three straight over two weeks, playing the Unicorns Friday and Beavers on Sunday.

The first 1,000 fans will receive a Buzz Bobblehead during Sunday’s game between the Mammoths and Beavers. A Pat Benatar Tribute Band is the featured group for WCSX Classic Rock Saturday, while the weekly fireworks show presented by Metro PCS occurs Friday.