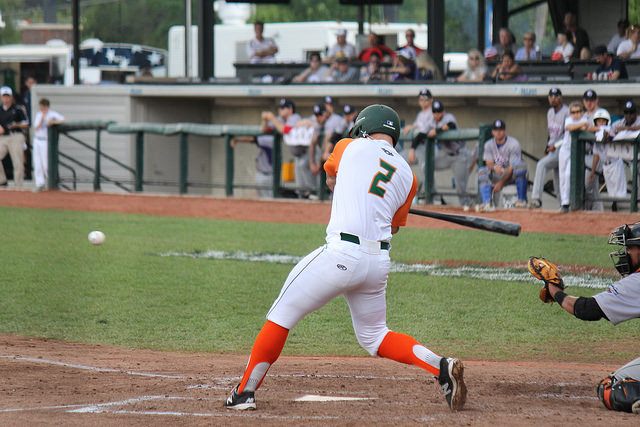 Utica — It was a good day for hitters at Jimmy John’s Field between the Utica Unicorns and Eastside Diamond Hoppers, but the Diamond Hoppers were able to come out on top with a 9-8 victory.

“I saw that he threw me a first-pitch change-up, and I had a feeling he might be coming back with it,” said Stewart when asked about his home run at-bat. “He did, and I was able to put a good swing on it.”

In the top of the first inning, the Unicorns struck first with a three-run home run off the bat of Chris Cruz. Nicco Lollio extended the lead in the top of the second inning with a solo home run of his own to make it a 4-0 ballgame.

In the bottom half of the second inning, Cyle Figueroa hit a sacrifice fly to cut the deficit to 4-1.

John Menken hit an RBI single in the bottom of the fifth inning to score the ninth run of the game for the Diamond Hoppers.

“We were able to out-score and out-hit them, and with the wind blowing out, we knew it would be a high-scoring game,” Diamond Hoppers Manager Paul Noce said.

Torey Deshazier threw the final two innings for the Diamond Hoppers and didn’t allow a baserunner to pick up the six-out save.