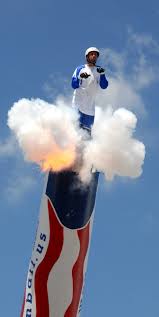 Watch a guy get shot out of a cannon - what more could you ask for?

And don’t forget it’s Thursday – that mean’s it’s Thirsty Thursday. This means $1 draft Bud and Bud Light’s. We will also have $2 Shocktop Drafts throughout the Ballpark, $2 Modelos, $2 Craft 7 oz. at the Craft Beer Cart Only.