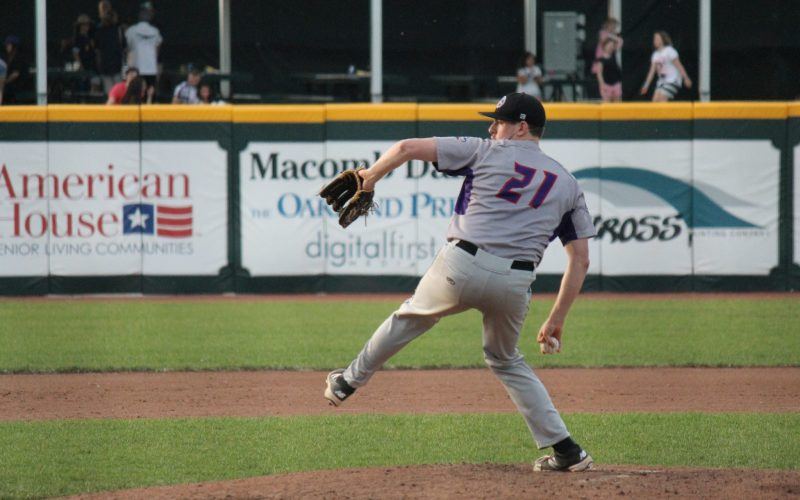 Utica — Unicorns starting pitcher Donny Murray threw seven innings of one-run ball, and the Unicorns offense came through with three runs in the fifth inning, one in the sixth inning and three in the seventh inning to defeat the Westside Woolly Mammoths, 7-1.

In his seven innings, Murray gave up just one run, one walk, five hits and struck out eight.

The Mammoths took a 1-0 lead on a solo home run by Hagen Wilkey, but Murray would find his groove for the next four innings.

“I started to feel a little bit better around the third or fourth inning,” said Murray. “I made one mistake with the home run, but other than that I felt pretty good.”

The Unicorns came back in the fifth inning with three runs of their own. Taylor Grzelakowski hit an RBI single, and Mike Rampone followed with a two-RBI double to left field to give the Unicorns a 3-1 lead. Clay Ardeeser hit an RBI double in the sixth inning to make it 4-1.

In the top of the seventh, Brandon Rawe and Chris Cruz hit back-to-back RBI singles, and Brandon Larkin-Guilfoyle hit a two-RBI double to make it a 7-1 ballgame in favor of the Unicorns.

“We were able to string some hits together and got a comfortable lead, and it was a good all-around game for us,” Unicorns Manager Jim Essian said.

Unicorns shortstop Brett Balkan was 2-4 with two singles and two runs scored in the victory.

The Unicorns will be back in action on Sunday, June 4, when they take on the Eastside Diamond Hoppers.