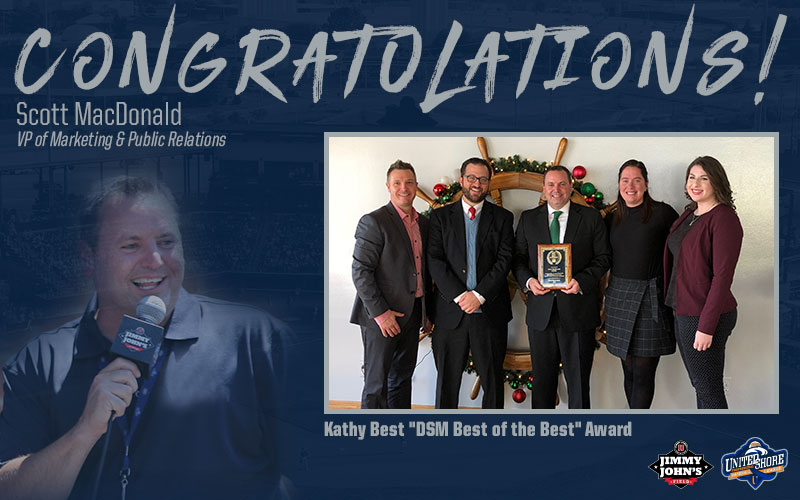 DETROIT – Scott MacDonald, Vice President of Marketing and Public Relations for the United Shore Professional Baseball League, has been named as the Kathy Best “DSM Best of the Best” Award recipient, announced by the Detroit Sports Media on Wednesday. MacDonald, a native of Metro Detroit, has spent the last 19 years working in media relations.

“I am very humbled to be recognized for this prestigious award,” said MacDonald. “Several of my mentors and friends have earned this distinction and I want to thank all of them for their support and wisdom over the years. This past year at the United Shore Professional Baseball League has been the most fun I have had in the work place, and the opportunity to serve the Detroit media has been a privilege. Thank you to the Detroit Sports Media organization for this great honor, and thanks to USPBL Owner and Founder Andy Appleby, COO Dana Schmitt and the entire staff at the USPBL that helped make this possible.”

MacDonald grew up in Bloomfield Hills, Mich., and graduated from Lahser High School in 1994. He earned a baseball scholarship at Henry Ford Community College and then played baseball and golf at St. Andrews University in Laurinburg, N.C. After graduation, he went on to earn a master’s degree in public administration from Oakland University in 2002. MacDonald worked in Athletic Communications at Oakland (1999-2002), North Carolina (2002-03), Georgia Tech (2003-07), Oakland University (2007-17) and now serves as the VP of Marketing and Public Relations at the USPBL.

The USPBL reached new heights in 2018 as media coverage surpassed a half-billion people through national and local media platforms. The developmental professional baseball league had two plays featured on the Emmy Award Winning Show, ESPN’s SportsCenter Top 10 Plays, and aired 10 games on ESPN3. Jimmy John’s Field witnessed 61 sell outs in 75 games, and set a new single-game attendance record of 4,499. The Reading Program doubled its numbers from the previous year to 46,000 students, and six players signed with Major League Baseball organizations to advance the overall number to 26 since 2016.