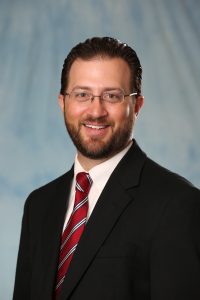 Hergott played a vital role in 2020 by launching the USPBL Network to broadcast games on Facebook and YouTube, which proved a valuable giveback to the league’s corporate sponsors, who stuck with the league during the pandemic. Overall, the broadcast reached more that 5.4 million people, with nearly 1 million viewers (16,793 per game), while also increasing Facebook followers and YouTube subscribers by nearly 2,000.

Before joining the USPBL, Hergott spent six years working intercollegiate athletics at the University of Detroit Mercy, responsible for brand awareness, marketing, promotions and corporate sponsorships. He was a member of the senior staff and launched the “City Basketball Series” in 2016 to help raise nearly $18,000 dollars for Detroit Public Schools.

Hergott has been recognized for his work nationally earning Swimming World Sports Information Director of the Year (Honorable Mention), along with two CoSIDA Publications awards for the 2007 women’s cross country media guide. The publication earned the honor for the nation’s Best Cover and was voted as the country’s second-best media guide overall.

He earned a master’s degree in sport and athletic administration from Gonzaga University and has a bachelor’s degree in business and public relations from Ferris State. Hergott also has a degree in residential design from Washtenaw Community College.

A native of Ann Arbor, Mich., Hergott is married to Jennifer and they reside in Livonia.