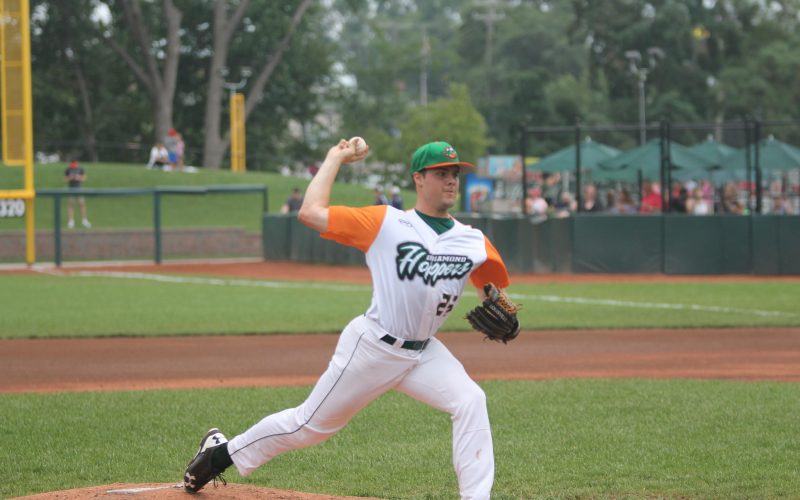 Diamond Hoppers Come from Behind for 5-3 Win

Utica — Although the Birmingham-Bloomfield Beavers had a 2-0 lead in the sixth inning, the Eastside Diamond Hoppers got some clutch hits in the seventh and eighth innings to earn a 5-3 victory.

Diamond Hoppers first baseman Esteban Gomez was 3-4 with an RBI in the victory.

“I was looking to drive the ball the other way, but I’ll take that little bloop hit and an RBI,” Gomez said about his RBI single.

In the top of the second inning, Daniel Oliveri hit a sacrifice fly to center field to give the Beavers an early 1-0 lead.

Dan Kennon hit a one-out triple in the top of the sixth and came around to score on a wild pitch to put the Beavers ahead, 2-0.

The Diamond Hoppers got on the board in the bottom of the sixth on a sacrifice fly by Kam Stewart. With the RBI, Stewart now leads the league with 30 RBI’s.

In the bottom of the seventh, John Kraft hit an RBI double to tie the game at two. Kraft came around to score later in the inning to give the Diamond Hoppers a 3-2 lead.

The Beavers came back to tie the game at three when DJ Martinez drew a bases-loaded walk in the eighth. However, the Diamond Hoppers scored two in the bottom of the eighth to go ahead 5-3.

“We really fought and to see these guys not let that one slip away was tremendous,” Diamond Hoppers Manager Paul Noce said. “It was a good ballgame on both sides.”