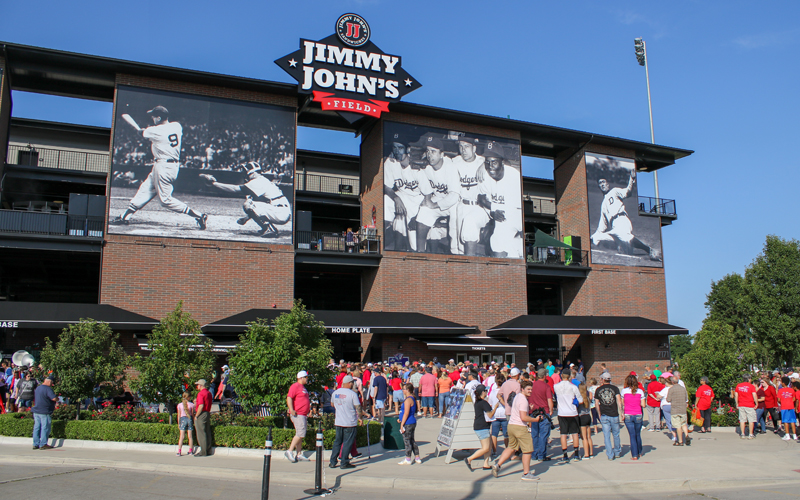 By MIKE SCOTT
Special Writer to the USPBL

After all the home runs, steals, strikeouts, fireworks, hot dogs and mascot shenanigans, the United Shore Professional Baseball League (USPBL) will be hosting its playoffs this weekend in historic downtown Utica, Mich., this Friday through Sunday.

The No. 2 seed is the Utica Unicorns, which earned a bye into the semifinal game, held Saturday at 7:05 p.m. The Unicorns will battle the winner of Friday’s 7:05 p.m. game between No. 3 seed Birmingham Bloomfield Beavers and the No. 4 seed Eastside Diamond Hoppers.

The playoff seeds were finalized the last week of the regular season with the Unicorns and Woolly Mammoths deciding the regular-season title and top seed on Saturday night with Westside’s 7-0 victory behind right-hander Dan Williams, who earned the win in his first-ever start. Will Johnson had two hits and two runs scored and Wiskur belted his 14th homer this season as the Mammoths won the pennant.

Among the league leaders during the regular season were Wiskur, who led the league with 14 homers, 46 RBIs and a league-leading .983 OPS, the Beavers’ Adam Gauthier ranks in the top five in the USPBL in many offensive categories, including second in runs scored (40), RBI (37) and third in on-base percentage (.429). Eastside’s fleet centerfielder Pat Adams captured the USPBL Batting Title with a .327 average, and broke the single-season record with a league-best 47 walks.

The top pitchers during the regular season were Matt Cronin from the Woolly Mammoths and Donald Goodson from the Unicorns. Cronin finished 7-0 with a 2.30 ERA and Goodson was 3-2 with a 2.31 ERA and a .169 opponents’ batting average. The Unicorns’ Ty Hensley and Beavers’ Garrett Christman have been strong down the stretch. Hensley is second in the league by holding opponents to a .211 batting average and Christman is second with six wins in the USPBL.

It has been a successful year for the USPBL in building upon its reputation for getting players signed to major league franchises. Utica Unicorns Adrian Guzman and Eric Jones signed contracts in late August with the Minnesota Twins organization, becoming the eighth and ninth players to earn MLB contracts this season. A total of 36 players overall have signed out of the USPBL.

Earlier in August former Utica Unicorns pitcher Randy Dobnak became the first USPBL alum to get called up to a Major League roster, having appeared in multiple games for a Twins team that is chasing an American League Central Division title. Dobnak returned to Jimmy John’s Field and was interviewed between the fifth and sixth innings. “It’s been an unbelievable experience,” Dobnak told the crowd. Two years ago I never would have thought I would be where I am today. I’m speechless (thinking about) the opportunity (the USPBL) gave me to jump start my career.”

A limited number of tickets still remain for Championship Weekend presented by OUR Credit Union. There will be food and drink specials available and the final Friday night fireworks will be held this weekend. Learn more by visiting USPBL.com.