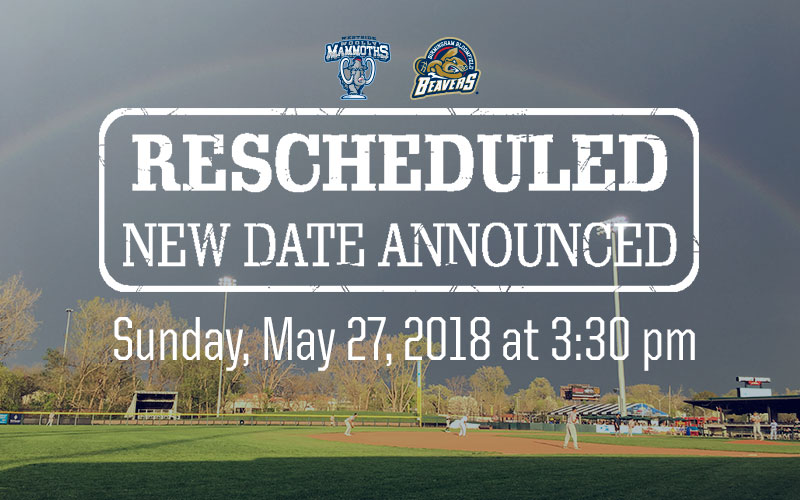 UTICA, Mich. – The May 11 game between the Birmingham Bloomfield Beavers and Westside Woolly Mammoths has been rescheduled for Sunday, May 27 at 3:30 p.m. as part of a doubleheader between the Beavers and Woolly Mammoths, announced by the United Shore Professional Baseball League on Saturday. The teams will play two seven inning games on May 27, with the originally scheduled contest starting at 1:05 pm, followed by the makeup game.


Fans with tickets to the May 11 game are NOT REQUIRED to use their tickets for the rescheduled make-up game on May 27th at 3:30 p.m. Tickets for the May 11th game also may be exchanged for a similar ticket location for any remaining regular season game during the 2018 season at Jimmy John’s Field, based on availability.


All tickets are based upon availability, and are valid for an equal, or lesser value, ticket. No full or partial refunds will be given for a difference in ticket price. Fans should redeem their tickets early once they know what game they would like to attend to avoid that game being sold out.

In order for a ticket exchange to take place, the tickets must be presented in person at the Box Office or by mailing the tickets to the USPBL office at the address listed below. If a guest mails in tickets, they must include their contact information and top three game choices as well as seating preference. They will be contacted by a USPBL representative when the tickets are received.