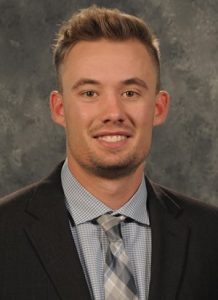 Alex Maloney joins the Birmingham Bloomfield Beavers after playing in the Chicago White Sox organization over the last two seasons. He began his professional playing career in the USPBL for the Beavers under Manager Chris Newell.

Along with serving as an assistant coach with the Beavers, Maloney joined the Wayne State University baseball coaching staff in August of 2018 as a graduate assistant coach.  He will work closely with the pitching staff.

Maloney played collegiately at Ball State from 2013 until 2017 where he was a team captain and a four-year starter.  He was the primary shortstop and closer for the Cardinals.  Maloney was named a Top 300 prospects in 2016 by D1Baseball.com and was rated a Top 50 shortstop for the 2017 season.  He earned the team’s  “Dirt Bag Award” for the player who is voted to be the hardest worker and most determined student-athlete.

He was scouted by over 25 MLB teams. Maloney ranks second in walks, third in at-bats, games played, game started and is in the top 10 in hits.

He graduated from Ball State in 2017 with a degree in Political Science and a minor in Business Information Systems.  Maloney attended Chelsea High School and Delta High School in Muncie, Ind.