UTICA, Mich. – Kevin Lambert went 2-for-5 with two RBIs, while Ari Sechopoulos hit his league leading sixth home run of the season to lead the Utica Unicorns (10-1) over the Eastside Diamond Hoppers (4-7), 7-5, on Sunday at Jimmy John’s Field. 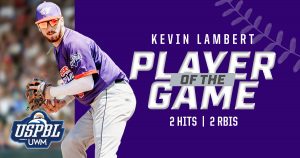 Drue Galassi went 2-for-4 with two runs and one RBI. Right-handed pitcher Jean Muntaner started his first game of the season, working 5.0 innings, scattering four hits, four runs and striking out five. RHP Perry Bewley and Keon Taylor combined to throw 2.0 scoreless innings to close out the game for the Unicorns.

Leading the Hoppers offensively was first baseman Joe Burke, going 1-for-4, hitting his fourth home run of the season.

The Birmingham Bloomfield Beavers will take on the Eastside Diamond Hoppers on Thursday night at 7:05 p.m. Thirsty Thursday will feature $2 Bud and Bud Light, $5 craft beer specials in the Craft Beer Garden, and its Ted Lasso Night. The first 500 fans through the gate will get a free Pepsi visor, a mustache, and sunglasses. The Beavers will be wearing Ted Lasso themed jerseys. The jerseys will be available to bid on after the game. Proceeds from the auction will go to the Suite Dreams Project.